Mazal Tov to Bob & Sharon Miller on the engagement of their son Dovid to Yael Klagsbrun of Greater Passaic. Dovid has been learning at Beth Medrash Govoha in Lakewood.

At Yael’s home, I also met the famed lawyer Ron Coleman, as proven by the attached photo he took with a small electronic device. This reassured us that we both existed independently of the Web. 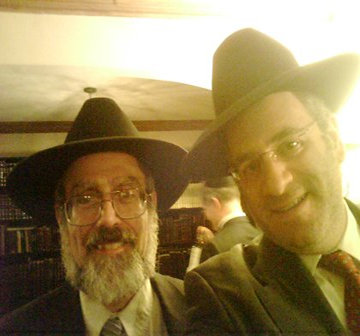 We’re a little envious that Ron got to meet Bob, but after the Chofetz Chaim Heritage’s film yesterday about Envy we’re working on curtailing the feeling. At the CAY showing in KGH, Rabbi Krohn, who was a speaker in the film showed up to watch it, and told over some stories which hit the cutting room floor. It was pretty cool.

Rabbi Welcher said in his Tisha B’Av shiur that we need to be constantly aware of Chesed opportunities. We have to be proactive in our chesed. Chesed can be something small like wishing someone a Mazal Tov. So we would like to take this opportunity to thank Bob for his active participation here on Beyond BT and wishing he and his wife Sharon a Mazal Tov on the engagement of their son Dovid.