A few weeks ago, I posted 12 Fundamental Spiritual Beliefs based on Rabbi Chaim Moshe Luzzato’s Derech Hashem. The context was, if I only had a few minutes and wanted to give an overview, what would I teach from Derech Hashem.
I’ve refined them and created a graphic to help install these fundamental ideas into our long term memory. 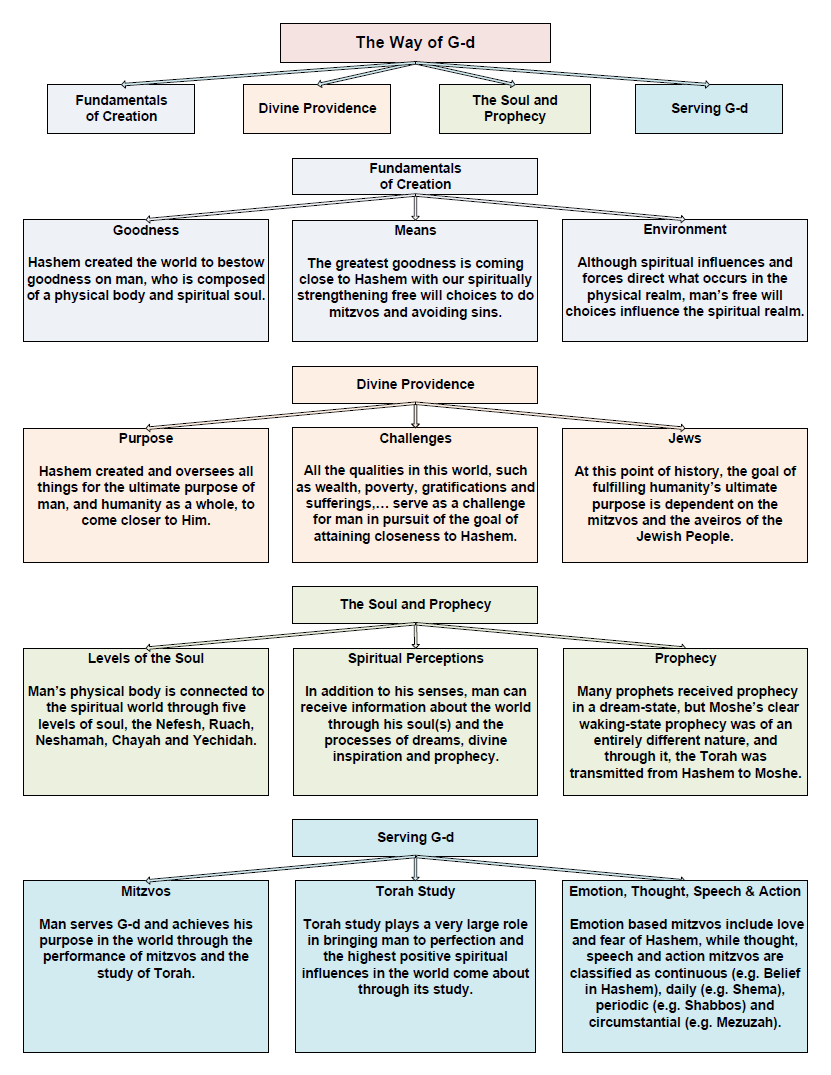 The Way of G-d has four sections
1. Fundamentals of Creation
2. Divine Province
3. The Soul and Prophecy
4. Serving G-d

1. Fundamentals of Creation
Goodness – Hashem created the world to bestow goodness on man, who is composed of a physical body and spiritual soul.
Means – The greatest goodness is coming close to Hashem with our spiritually strengthening free will choices to do mitzvos and avoiding sins.
Environment – Although spiritual influences and forces direct what occurs in the physical realm, man’s free will choices influence the spiritual realm.

2. Divine Province
Purpose – Hashem created and oversees all things for the ultimate purpose of man, and humanity as a whole, to come closer to Him.
Challenges – All the qualities in this world, such as wealth, poverty, gratifications and sufferings,… serve as a challenge for man in pursuit of the goal of attaining closeness to Hashem.
Jews – At this point of history, the goal of fulfilling humanity’s ultimate purpose is dependent on the mitzvos and the aveiros of the Jewish People.

3. The Soul and Prophecy
Levels of the Soul – Man’s physical body is connected to the spiritual world through five levels of soul, the Nefesh, Ruach, Neshamah, Chayah and Yechidah.
Spiritual Perceptions – In addition to his senses, man can receive information about the world through his soul(s) and the processes of dreams, divine inspiration and prophecy.
Prophecy – Many prophets received prophecy in a dream-state, but Moshe’s clear waking-state prophecy was of an entirely different nature, and through it, the Torah was transmitted from Hashem to Moshe.

4. Serving G-d
Mitzvos – Man serves G-d and achieves his purpose in the world through the performance of mitzvos and the study of Torah.
Torah Study – Torah study plays a very large role in bringing man to perfection and the highest positive spiritual influences in the world come about through its study.
Emotion, Thought, Speech & Action – Emotion based mitzvos include love and fear of Hashem, while thought, speech and action mitzvos are classified as continuous (e.g. Belief in Hashem), daily (e.g. Shema), periodic (e.g. Shabbos) and circumstantial (e.g. Mezuzah).